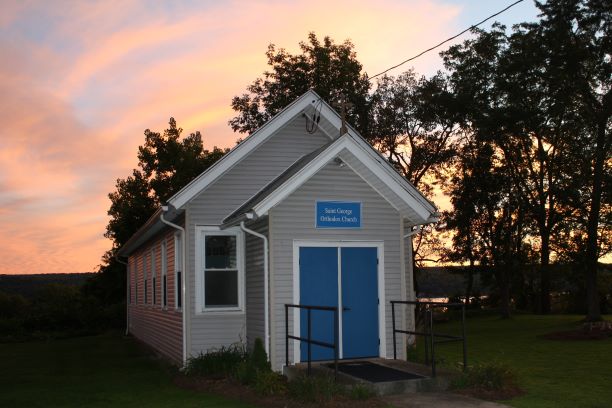 By the late 19th century, Orthodox Christians from the former Ottoman Empire left their homes and families for a better life in the Americas.  Persecuted for centuries and regarded as 2nd class citizens, they hoped to find a better life in the New World where they could worship without fear.   Many Syrians arrived in Tompkins County and settled on a hill overlooking the International Salt Company in Myers (Lansing), NY.  The company provided employment, homes and a future for their families.

By the early 20th century, the number of Syrians coming to Myers for employment at International Salt steadily increased.  In 1917, the men of this community formed, “The Young Melkie Society,” a fraternal organization that served to meet the needs of the community and to send support back to the families living back in the Melkie, a term used to identify the small villages north of Damascus, Syria, from where many of the Syrians had emigrated.

Although they remained faithful to their Orthodox Christian Faith, they had to travel some 50 miles to St. Elias Syrian Orthodox Church in Geneva, NY to attend the Divine Liturgy and receive the sacraments of baptism and marriage.  In the early 1920’s, the community asked the International Salt Company to build a structure that could serve as their church, and in 1924, the company built St. George Orthodox Church.

The church grew throughout the early to mid-20th century with nearly 100 members.  By the mid-1970’s, the community experienced a decrease in parishioners as the Salt Company closed and the younger generations moved out of the area for employment opportunities.  The aging parish could not sustain a full-time priest so services were limited to 2-3 times a year.  By the mid-1980’s, services were held just once a year.

In the summer of 2012, a group of parishioners contacted Rev. Matthew Binkewicz, an ordained Orthodox Priest, and asked if he could serve the needs of the faithful who remained on “Syrian Hill.”  Fr. Matthew accepted their request.  A group of faithful parishioners and friends devoted several weekends to repair, repaint, and refresh the interior of the church.  On Sunday, August 28, 2012, the Divine Liturgy was served in the newly renovated church.

Since that Sunday in August of 2012, the faithful of Saint George continue to worship the Lord and participate in the Divine Liturgy. Our small parish continues to grow and offer their time and talents to serve the needs of our community.